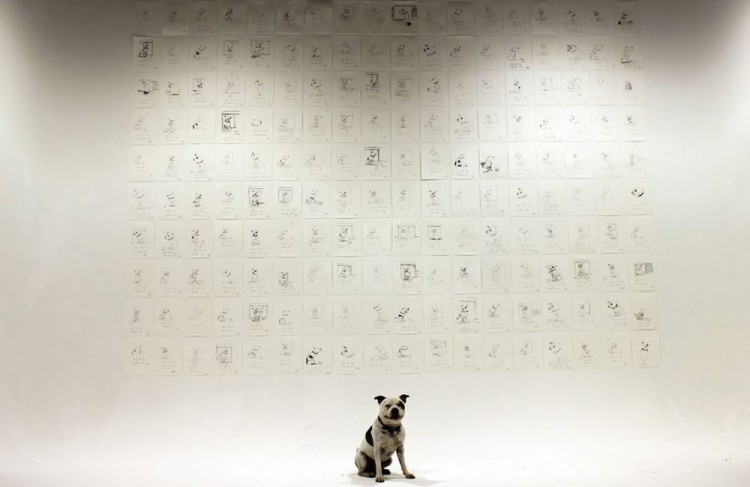 In September 2013 John Dolan staged a blockbuster show at Howard Griffin Gallery where he worked in collaboration with over 50 of the worlds most recognisable street artists. Dolan drew the skyline of Shoreditch, a screen print of this was produced and copies sent all over the world for artists to work directly onto Dolan’s cityscapes.

For this exhibition Dolan worked with artists such as Thierry Noir, RUN, Steve ESPO Powers and ROA and also displayed his own original works. The level of refinement and attention to detail within these architectural studies are highly incongruous to Dolan’s situation of living homeless on the street and he is a genuinely unfettered artistic talent with no training whatsoever.

It is John Dolan’s second exhibition at the gallery and will focus on his unique relationship with his dog George and tells the story of how George enabled him to turn his life around with his art. The gallery are going all out to make a visually arresting exhibition and are recreating Shoreditch High Street inside the gallery complete with pavement, curbs, telephone exchanges and pelican crossings.

Dolan has produced 700 drawings of the George the Dog which will cover every inch of the gallery walls. The repetition of the 700 George the Dogs is very interesting. There are only 180 in the studio shoot below but it is quite an effect with only that number.

The collaboration collection has now grown to over 80 pieces and is very unique in the sense that another artist has created an environment for all of these other artists to work in. The international superstars of the street art and graffiti movement (the world’s biggest emerging art form) collaborating with a compete down and out who at the time was on the streets.

These are still being produced by artists all over the world and there will have a collection of all new collaborations in the downstairs of Howard Griffin Gallery as part of the John and George exhibition which opens there on the 17th of July. Artists featured include 2501, Broken Fingaz Crew, Gold Peg and The London Police.

For further details, head over to the Howard Griffin site.