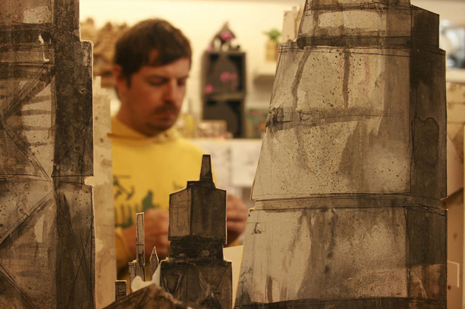 As we mentioned in a previous post, we hit the Ronzo solo show down at the Stolen Space Gallery at the Truman Brewery. We caught up with the man himself and managed to put together a little interview to give you an insight as to how he works, who influences him and where he sees things going…

First up, tell us a bit about yourself – how did you get to where you are today?

I’m Ronzo. 32, I came to London in 2000 (to avoid paying my parking tickets) from Munich, Germany – where I’m from.  I guess i’ve been always drawing and interested in artistic stuff. I started Graffiti pretty late when It was 1997 and I was 17. My friends had already been doing it for years. They were all really good already. I wanted to do it too because I thought it was cool. In 2000 when I got to London it was sticker madness. Stickers and poster everywhere around Old Street. Less hassle with the police than real Graffiti and easier to make I guess. It was the birth hour of the street art as we know it or at least it felt like that.

Read the rest of the interview after the jump…

Who are your biggest influences?

Real life experiences influence my work. Stuff that happened to me, people, places and human behaviour I guess. For example I see a guy on the street walking a freaky looking dog. So I make a drawing of a guy walking a cockroach instead of a dog. Sometimes I don’t even remember this stuff – it just happens subconsciously.

Another influence are the artists working around me. They are doing amazing stuff and pushing boundaries. It’s very motivational to see things like that happen. Artists like D’Face, Conor Harington and Word to Mother.

And of course a big influence is the work of other artists I’m really crazy about. From Katsushika Hokusai work to Mangas, to Hieronymus Bosch, to MC Esher,  to Joan Miro, to graffiti artists like Mode2 and Won (ABC Crew) from Munich. There is so much great stuff out there and I just love looking at it. That reflects in your own work.

Also Books and Films influence me a lot. I like having influences from outside the street art community to ensure it looks different. 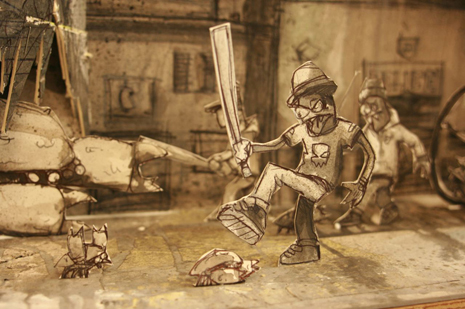 Obviously your first solo London show is a big thing – how did you get involved with Stolenspace?

I met D*Face and many other artist at a Banksy show in Dragon Bar (2003 I think it was) He made “The Outside Institute” at that time, a Gallery in central London dedicated to street art. Lots of artists were hanging out there. But when “The Outside Institute” closed down, nothing happened for a while. Then “Stolen Space” came up. I wanted to have a studio because I was sick of working from home. They asked me if if I wanted to get a studio together. So I joined up. That was in 2006, Stolen Space was much smaller then. It really has evolved in the last two years.

Your work is about the landscape and inhabitants of a post-apocalyptic London – how did this idea come about?

I really wanted have an overall theme going on rather than just different paintings hanging in a room together. I always loved all these evil future visions like Escape from New York, Mad Max, Children of Men, etc…then I found the old Greek word “Dystopia” which stands for “a society gone wrong” 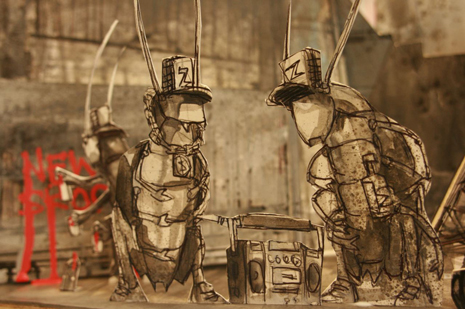 I customized it a bit, so it reads “Disstopia” and loved it instantly. Most future visions are based in New York because it’s Hollywood made. I thought London could look cool too, and the people here can relate to it because they walk around here everyday.

How do you portray the life of the inhabitants of this world – I see humour is a big part – and obviously this a social commentary on what you think would happen?

As I said I love this evil future visions. But I also love Futurama and all the comedy elements. So even if it looks pretty dark I wanted to keep it a bit funny in the same time. so it’s not too bad. Not sure if this is exactly what will happen but who knows? Maybe we will be around long enough to witness what it’s gonna be like… 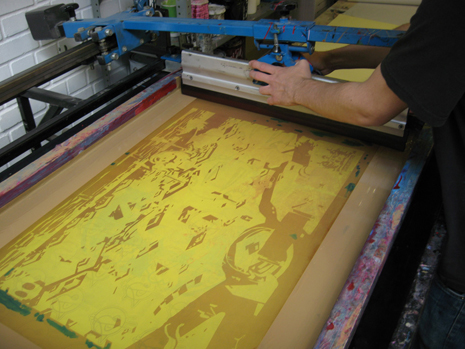 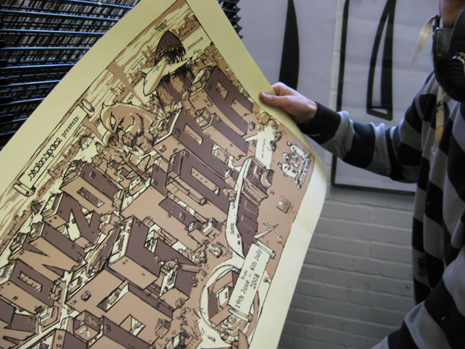 The detail that goes into your 3D relief pieces is incredible, this is a medium you are obviously very comfortable working with. Do you sketch out everything first or build these “apocalyptic” worlds in your mind and then freestyle them?

I draw and draw everything a 100 times. When I freestyle then they come out different but it doesn’t really matter because my stuff looks sketchy anyway. So it’s quite easy for me I guess.

Your colour palette is quite limited, do you use this to enable a high contrast in your pieces – and how do you feel this represents what you are trying to portray?

It’s because of the theme. I imagine in Disstopia everything is a bit grey and covered in dust. It’s not the most colorful place.

Your work is very different from a lot of “urban artists” who are around today – do you see yourself under the same label?

I would like to see my myself under the “Ronzo label”. That’s the only label I’m comfortable with. My work looks different because I don’t wanna it to look like anything which is out there already. A lot of people aren’t so fuzzed about this point by the looks of it. But i get really annoyed by copying.

For more from Ronzo, please check out his site at www.ronzo.co.uk