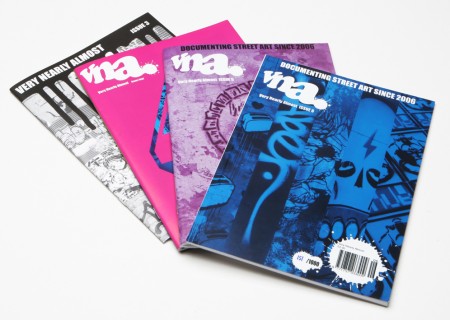 To mark the release of issue 6 of Very Nearly Almost magazine we caught up with the one man publishing machine responsible for the magazine’s photography, editorial, design, prinitng, distribution, marketing and everything else.

Read what he had to say on everything from the graf vs street art debate to his plans for the future of the magazine, after the jump.

Very Nearly Almost tends to fly off the shelves pretty quickly so if you can’t find it at your local spot grab it direct from the VNA shop here. 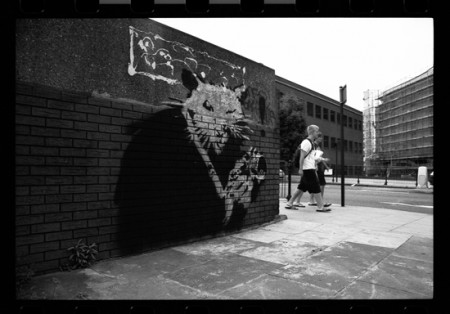 Hey George, for the people that have not had the pleasure of meeting you, can you tell us a little about yourself? Background, interests, occupation, etc.

Sure… Im George, I live in London, I have a design day job and I spend most of my spare time walking the streets of London taking photographs of graffiti and street art. 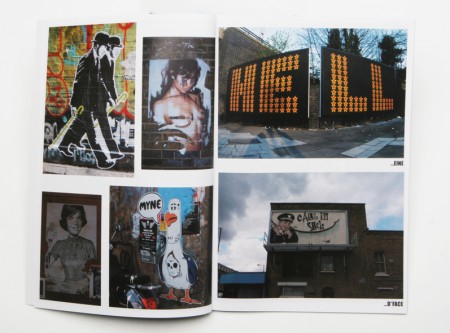 There’s hundreds of people out there who take pictures of London’s graf and street art but very few with the balls to stick their neck out and publish a magazine. You started Very Nearly Almost back in 2006, and can you tell us why you set it up and what your objectives for the magazine are?

Erm… I guess I have been activly involved in graffiti from a young age. I used to write under various names in Kent and London. So I have always been photographing graffiti along the way. It wasnt until after doing a degree in photography that I became more aware of street art. Early media interest in Banksy got me out on the streets of London looking for his pieces and soon I discoverd a whole new world of ‘street art’ that wasnt just tags, dubs and pieces. Suddenly I noticed Toaster stickers and D*face stickers and then various stencils and paste ups. It then became a bit of an obsession really. Over time I had all these photos on disc and in negative format but nothing to do with them, so in 2006 I stayed late at work for a few weeks and just rinsed the work photocopier… The first issue of VNA was a numbered edition of 120. The second issue was an edition of 300. The response I got was fantastic and I havent looked back since. By issue 3 I wanted it printed so I hooked up with Cromatics in Dresden and they printed it for me… Its grown from there I guess.

These days there are alot of people photographing street art. Its great to see whats going on, but most of it sits on the internet in forums and on flickr sites… Which is cool, but I like stuff in printed form that you can hold and put on the shelf to gather dust. 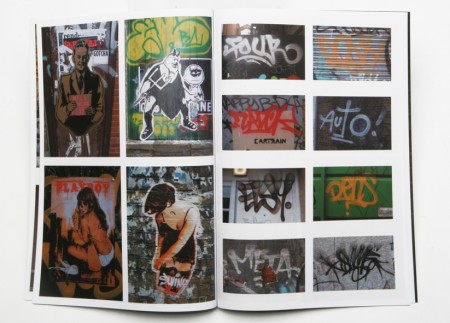 One of the reasons that we, and i’m sure many others, enjoy VNA is the equal mix of both street art and graffiti throughout the magazine’s pages. Is this balance of coverage for the two disciplines something you are conscious of and something that you intend to continue?

Definitely. As I said my roots are with graffiti. I enjoy finding a really crisp fat tag on a wall as much as I like finding a fresh paste up or stencil. There is alot of handstyle work that goes into a good tag and making it your own and you just have to appreciate the balls it takes to go out at night bombing. In my opinion street art is a subculture of graffiti art and you cant forget that. Its not really intentional how much ‘Street art’ and how much graff goes into it. Sometimes there is more graffiti and other times more street art. I just print as much of it as I can. 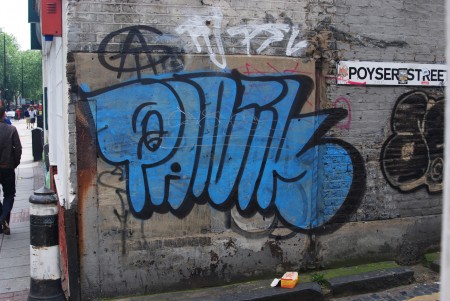 When you’re out walking the streets with your camera in hand, which artists do you most enjoy stumbling across? And what is it that you’re looking for in pieces?

I enjoy it all… I get told of pieces going up via emails which I really appreciate, but its nice to find something accidentally. I really enjoy catching Sickboys work. Its consistantly good and usually big. Also Sweet toof and Cyclops just get up everywhere, the same can be said about the ATG crew. C215’s stencils are amazing too and just work so well in the streets. I also appreciate the graphic styles in Paste-ups by the likes of Obey, the toasters, Ace, Judith Supine and D*Face. But a simple one off sticker can sometimes just blow me away and slap a big fat grin on my face for the rest of the day. I have always tried to print exactly what I see in the streets. Its not my place to say whats good and whats bad. I have opinions obviously but VNA should just be a printed documentation of the scene at that time. 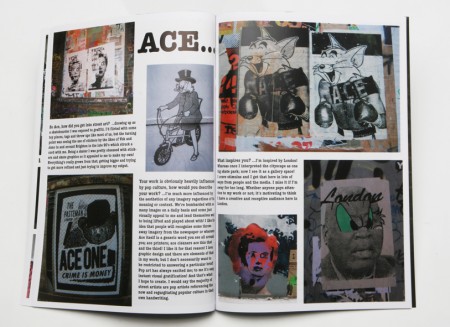 What can we look forward to from VNA over the next year or so? Tell us the masterplan!

There is definately no masterplan… Im just going to carry on trying to document London street art and graffiti. I have some support now from Stella Dore and Stolen Space which I really appreciate and hopefully will help the magazine grow and grow. I hope to improve still on the design and layout of the magazine which im getting help with, so its progressing all the time. There are plans for the next issue… I would like to bring in some more text, more interviews and features with some big names but also some unknowns. I really like the idea of someone buying the zine in a bookshop and it inspiring them to go out and try wheatpasting/stenciling/tagging …whatever. The scene in London right now is great and really exciting, so lets hope it continues or im gonna have to find something new to do in my spare time.

Thanks George, all the best.