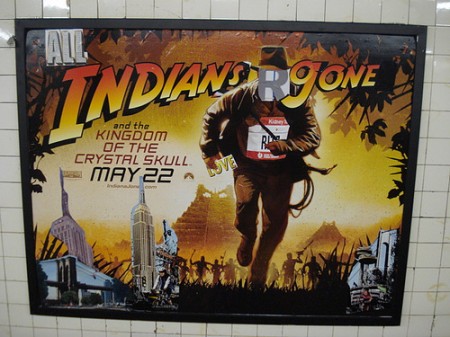 We’re big fans of Poster Boy here at UKSA, and although he’s not technically from the UK scene, we’d like to make an exception and introduce you all to this sterling talent!

Clever, Creative and seriously cool, Poster Boy is the masked crusader waging war on advertising billboards across NYC will only a razor blade as his weapon of choice. Interview by Helen Soteriou. All photos from Poster Boy’s Flickr, which you can check out here

Who is the guy behind the mask? Can you tell me about yourself and your background?

No ones behind the mask. There’s only the mask.

Do many people know your real identity? Do you parents know?

Only the people who need to know, including mummy and pop-pop.

How did Poster Boy come about? Why did you start cutting-up posters and did you ever think it would turn into the phenomenon it is?

I’m constantly torn between wanting to be an activist and an artist. I’m not the greatest artist nor am I the greatest activist, but I’m a pretty good Poster Boy and that requires being little of both.

New York is inundated with advertisements. So why spend money on materials when posters and billboards are ripe for the picking? Stealing and vandalising ads is illegal, but littering the public’s visual space with images and messages that are motivated by profit is wrong. There’s a lot of potential in working with your environment, especially if the motives are well place. Besides, the traditional mediums have never satisfied my ambitions.

I always hoped this would catch on. I couldn’t have been the only one with these sentiments floating around. 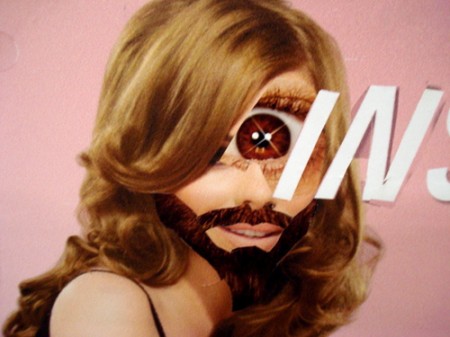 What are your views on advertising?

Advertising is bizarro art. Both are cut from the same cloth, but what sets them apart is intent. Art is driven, at least in theory, by the desire to express oneself. Advertising is driven by the desire to promote a product or service. Often times the two overlap making it hard to tell the difference. As long as there’s money to be made there’ll be advertising. I can’t deny that. With development of technology and the market comes increasingly elaborate ad campaigns. Sometimes the campaigns are funny. Sometimes they’re artful. But one thing I’ll never accept is public advertising no matter how clever the campaign is.

Do you think that people are more wary about believing the images / messages that are printed because of the worldwide economic downturn?

The economic pinch continues to breed skepticism. However, people have been wary of the media lies for a while now.

I remember our first conversation and the email you sent me:

Have you ever read something and said to yourself, “Christ, where have I been the last few years of my life?” Well, your email just did that to me. These type of requests and acknowledgements have always humbled me. …

Why do you think people are so taken by your work?

I think people relate to the work mostly because of the commentary. There’s a lot going on in the world financially, politically, culturally, and environmentally. The work touches on some of these topics. Often times with humor, which is very important in serious situations. 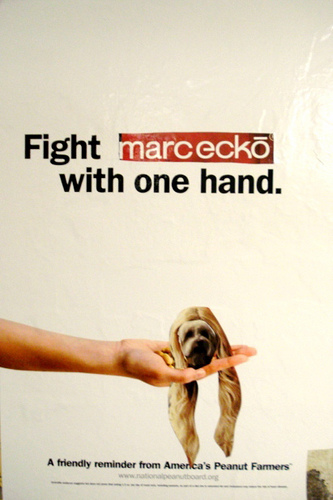 The other reason is the medium. I mean really, with the exception of the people profiting, who doesn’t hate public advertising?

We talked about some of your future plans and what Poster Boy intends to do next. You strike me as someone who has a strong passion and desire to follow his dreams – to continue to grow and be creative in the way you want.

I should hope so. My dreams are pretty much all I have right now.

To me you are sending out a clear message to people that they should not give-up on their desires -to listen to their hearts and pursue the path that they want without being afraid to voice their opinions. Do you think this is a fair statement?

I believe it’s a fair statement. As long as your path doesn’t involve the destruction of life I say follow it. The worst that can come from following your heart is knowledge and wisdom.

I believe that the whole point of street art is that it is on the street for everyone to see– you are not stifled creatively and not drawn by the $$$. Nobody tells you whether you are good enough. It is art for the people, not the selective few.

Street art is for anyone to experience. It works both ways. The streets serve as a venue for artists who wish to forego gallery-world hierarchies. 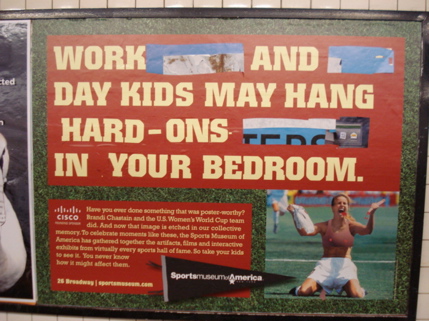 I’m not stifled or drawn by the money. Doesn’t mean the pressure doesn’t affect me. I’ve turned down some very lucrative deals in order to make a statement. I’ll be honest, when rent is late or I can’t manage three squares a day I feel a little gypped, but when those feelings start bubbling I just remind myself of why I started this.

All my life I wanted someone or something to believe in. Except for a few inspirations here and there I never found it. So I set out to be the that thing I always yearned for. So what if PB&J has been the menu for weeks or the lies to my landlord are getting better, life could always be worse. Besides, poverty tends to be quite the motivator these days.

I think the popularity of street art has exploded over the last couple of years and I feel that it is good and bad. Great street artists are enjoying the success they deserve and some are just riding on their coat-tails.

Actually, I don’t believe bad street art exists. I say cover every Goddam inch of concrete and steel! What bothers me are the people who try to mask gallery art as street art and vice versa. I’m not one for strict labels or definitions of anything, but there’s a fundamental difference. At the same time I understand certain situations call for compromise. I know I’m not the purest street artist or activist. There have been Poster boy shows with prints being sold, and I’m not even sure if I should feel guilty for it. I’ve always tried to bring something different to a show and I’ve never sold an actual Poster Boy piece. The point being that the street art persona should be critiqued and presented differently than the gallery art persona. Once street, graf, or whatever art, is brought into a controlled environment it ceases to be street art, period.

With the phenomenal costs prints and original works are going for it has become de rigueur to like street art. Yesterday, I went to opening night of an exhibition on Brick Lane in London , and it was dominated by the young and trendy. Like a few of the street artists who were present, I felt awkward and out of place. My question to you is how do you feel about how street art has evolved and do you feel proud to be labelled a street artist. Do you always see the streets as your playground?

Let me guess, some guy in a Basquiat shirt, skinny jeans, and an ironic mustache gave you the, “where the fuck is your Murakami bag” look? Don’t worry, we’ve got that too. It happens whenever something is in vogue. Next time just make a scene. Tell everyone you’re Banksy or that your dad owns the Tate.

I’m proud to be a street artist in the literal sense. I find comfort in the uncertainty of the streets.

How does it feel to have a platform? You have the attention of all the major media players in New York who are raving about the statements that you put out?

It feels really weird, ’cause I’m not that cool.

Who influenced you growing-up – people and / or other artists?

This one’s hard. You’d expect me to say Keith Haring or something. Not that he hasn’t, but I’ve been inspired by many characters in my short life. I can honestly say that Bugs Bunny inspired me as much as Fredrick Douglas.

How do you work – do you come-up with ideas on the spot or do you see posters and then think about how you can create images from them?

The work is always impromptu. It has to be, the ads are always changing. Even the gallery work relies on materials in the immediate environment.

Are there any other comments that you would like to make?

God Save the Obama.