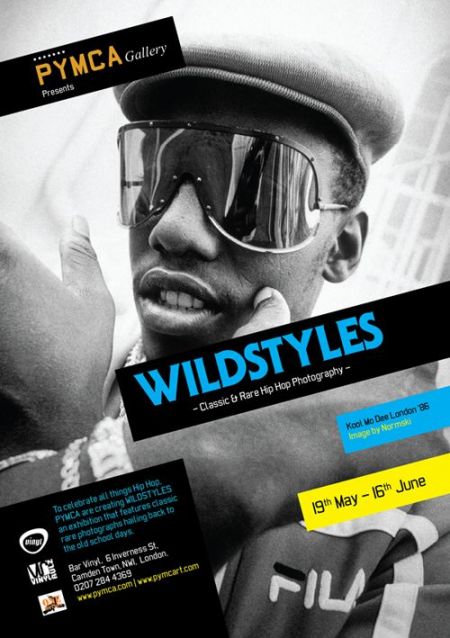 To celebrate all things Hip Hop and the 25th anniversary of the release of the definitive Hip Hop film ‘Wild Style’, last year PYMCA created ‘Wildstyles’ an exhibition that featured classic rare photographs hailing back to the ‘old skool’ days. Today we are moving the exhibition to Bar Vinyl in Camden Town and this time we are hosting a Hip Hop photography and art competition sponsored by PENTAX.

In 2007 PYMCA came to be known not just for its legendary archive of subcultural imagery but also for hosting some of London’s most iconic, memorable and show stopping events forming relationships with subcultural figures, companies and street legends including Carhartt, Kangol, Hip Hop Connection, Streetwars, Jumpoff, DayDream and Hip Hop collector Richio Suzuki among others.

From Raves in basements at the Pills, Stills and Bellyaches exhibition, to collaborating with Shane Meadows on the ‘This Is England’ film screening, with the ‘Skinheads’ exhibition at the BFI, to then stopping traffic on one of London’s busiest streets with the opening of the Hip Hop exhibition Wildstyles, PYMCA has become known for opening nights to remember. Wildstyles is an exhibition that takes you to the heart of Hip Hop, showing how this music became a way of life for a global generation through the eyes of those who were there. Photographers involved include Normski, Janette Beckman, Eddie Otchere, Ted Polhemus, Naki, Paul Hartnett and more…

PYMCA have collaborated with some of Hip Hop’s grand masters to take you back to the halcyon days of Adidas shell toes and Run DMC. Back in the days, the founding fathers of an emerging scene, DJ Kool Herc, Afrika Bambaataa and Grandmaster Flash, could not have imagined the now global reach of the new form of music that they pioneered. Hip Hop culture exploded like a bomb from the projects of the Bronx in the late 70’s and early 80’s. The combination of Scratch DJing, Rapping, Breakdancing and Graffiti Art have formed a complete subculture, which has taken on the mainstream and won. Hip Hop is now the most popular music in the world. From the first Block parties thrown by Kool Herc in 1974 to the ultra ‘Bling’ of modern Hip Hop and R&B, Hip-Hop has gone through many stages of development.

This year PYMCA have continued this reputation through their most recent show, Hartnett 76 > Now. An exhibition of 30 years of street and club culture that featured in London Fashion Week’s official events calendar. Now moving on to their next adventure, PYMCA is on the hunt to not just represent great pictures but emerging new talent through a competition.