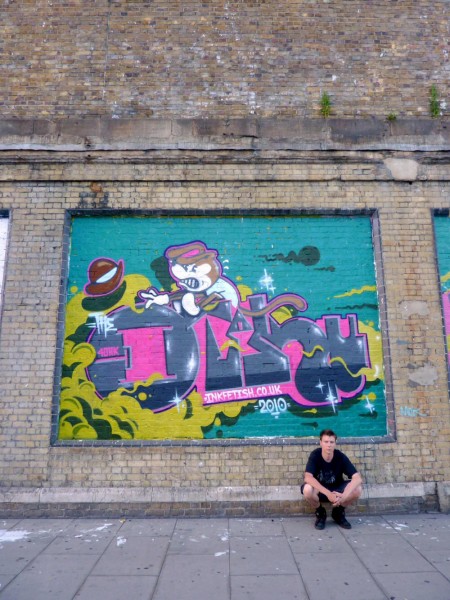 I’ll be honest, I have never been the biggest fan of manga inspired art, yet it was such a piece on Curtain Road in East London which introduced me to the work of Inkfetish. The vibrancy and fine detail simply pulled me in, and I’ve been a fan ever since.

For seven years streets around the world have been adorned with the unapologetically bold colours, strong themes and technical precision of his artwork. It is this distinctiveness that has led to projects with Nike, Manga and MTV amongst many others, and which has placed his name firmly on the radar of the art savvy.

Yet, as always seems to be the case with great talent, he has also received his fair share of negative attention. Every artist expects a certain amount of negativity surrounding their work, (I’ve been told more than once that it’s ‘just another part of the job’), but it’s certainly something which he seems to take in good humour (he recently re tweeted a negative comment made about him on his Twitter profile); but like it or loathe it, it’s hard to ignore Inkfetish’s work

I had a brief chat with him before his upcoming live paint at the Whitecross Street Party this weekend.

Where did the name Inkfetish come from?
The name was spawned after a long period of time spent working on pen and ink comic books; this was before my passion for painting surfaced. It was almost meant to be a brand name for my work but transformed over the years into more of a second identity.

How would you describe your style?
I think at this point in time, it’s a mutant hybrid of a few of my visual interests; Japanese culture, pop iconography and animation, American subcultures, comics and horror movies.

Who or what influences you?
I never really know how to answer this as I’m sure a lot of it is subconscious. Comics, animation, subculture, pop culture and movies all play their part. 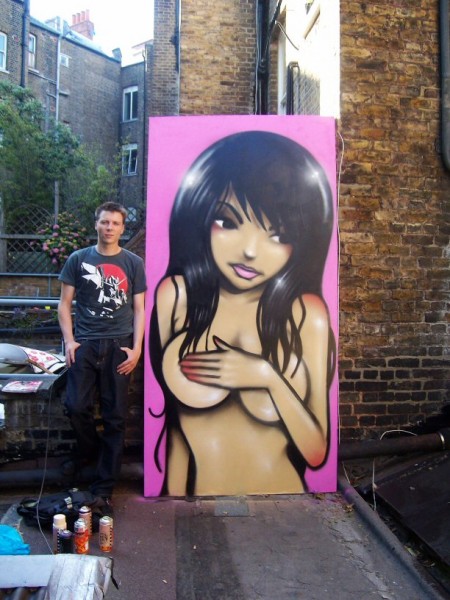 What made you first pick up a spray can?
I think at first it was just the deviant in me wanting to express myself outside of the realms of what’s considered art in the view of the establishment; that and a growing fascination with graffiti and interacting with the city itself. Throw in a misunderstood, slightly lost young man and you have the recipe for a budding graffiti artist.

Can you remember the first piece of work you produced on the street?
If simply tagging counts, I did a bunch of that before I started taking more conceptual street/ legal work more seriously. One of the first ‘pieces’ I did was of Pinocchio on a shop shutter to advertise a self-published comic I released.

We quite often see 40HK accompanying your work, what does this stand for?
40HK (Forty Hit Kombo) is the name of the graffiti crew I’m part of alongside Balrog, Jasik, Motel, Toe and Gfunk. It’s been going for just over a year and is a really interesting mix of people with totally different artistic backgrounds, from painting trains, to Illustrating, to showing fine art in galleries. We’re friends as well as painting partners which I feel is important. 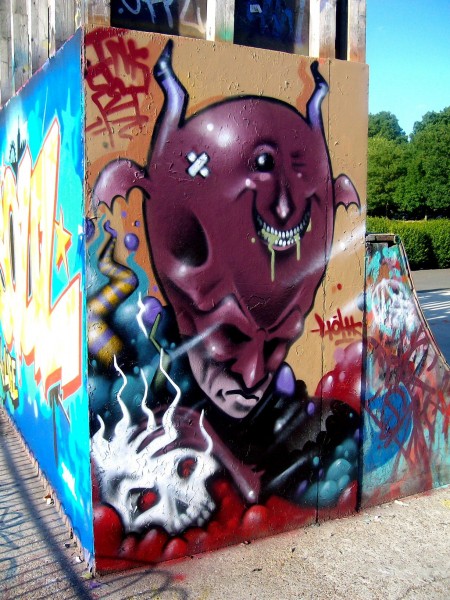 You’re current work involves a lot of Disney inspired characters, what’s all that about?
It’s a nudge to my first comic ‘No Strings’, a dark take on Pinocchio which really kicked off my interest in subverting classic Disney characters. It’s not the most original thing to do but feel like it suits the universe in which my work resides.

How long does a piece usually take?
Street pieces, I’d say anywhere between four and ten hours depending on scale and detail. I can work on canvases forever (and probably walls too given half the chance).

How do you feel graffiti/street art from the UK compares to that of other countries?
It’s difficult to answer as it’s all extremely subjective. The UK graffiti scene is quite an insular one and at times works against itself for that reason. I personally think places like Spain, France and Copenhagen are all ahead of us in terms of evolution of the art form.

Where, in your opinion, can you find the best street work?
It’s become a bit of a cliché but most stuff seems to go up around East London.

Where would be your ideal location?
Venice beach stands out as somewhere I’d like to paint again, or anywhere in Barcelona.

What do you prefer, painting or illustrating?
They’re all pretty much one and the same thing to me. When I’ve done a lot of wall stuff, a canvas is a nice change and vice-versa. I’m not really feeling illustrating too much as so much of it on a professional level entails sitting in front of a computer, and that’s something I’ve really tried to scale back on.

Do you feel you have to separate working identities?
I’ll sign most of my wall work with Inkfetish. With canvases, I’ll generally use my real name as I don’t like the idea of relying on a moniker with the galleries. I’ve been painting a few letter pieces recently using the name Otaku (Japanese phrase for obsessive fan). I feel I need these names to umbrella different ideas and motives. I’m not sure if this will always be the case.

What’s next?
I have a few ideas…we’ll see.

You can buy artwork and keep up to date with Inkfetish at www.inkfetish.co.uk