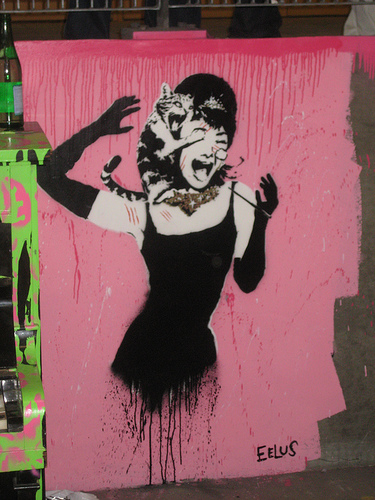 Eelus, one of the many artists with the Stella Dore group show starting on the 18th July at the Sebastian Guiness Gallery in Dublin is a firm favourite with us here at UK Street Art. We’ve got a nice little interview with the great man himself to prep you for the upcoming show.

Check it out after the jump

When did you decide to get into street art – and how did it come about?

I basically moved to London from Wigan (via 3 dark years on a degree course at Blackpool) about 8 years ago and had never experienced ‘street art’. So when I got here and shacked myself up in East London I was just pretty amazed to have my eyes opened to what was going on.

I didn’t have any creative outlets that were outside of work and instantly felt drawn to what was going on. I felt like I could somehow relate to the pieces I was walking past every day as well as thinking I could do better than a lot of the stuff I was seeing around.

So I started using small illustrations from my sketchbooks that were mainly shitty character based stuff to start with and started to get my head around the stencil process and put a few pieces here and there. From there I made my first big step forward which was painting the Shat-at image and things kind of just rolled on from that point.

The street scene is what inspired me to start cutting stencils but at the moment the majority of my stuff has been studio and show based pieces. Pretty much because I’d like to get my style and technique more consistent before I get back outside and the last thing we need is more shit stencils on the streets. I feel like if I’m not gonna contribute in a good way and push things forward then there’s no point, so I just want make sure I’m ready before I get back out there.

Who or what do you see as your biggest influences/inspirations?

Well my parents have to come as my main inspirations. They worked their fingers to the bone for about 18 years in job they hate, just to make sure I had everything I needed.

As for influences, just life, every day living on this little planet surrounded by nature and the amazing people I choose to spend time with and meet along the way. Anyone who is passionate about what they do and who work hard to get what they want. I love watching and reading science fiction, horror and any other generally crazy, weird, fucked up nonsense. I’m also fascinated by space and the far out alternative ideas as to where we all came from and why, as well as where we’re all going and for what purpose. I’m convinced that all is not as it seems.

Your recent piece at The Cans Festival was a very vivid pictorial – where did this idea come from?

Ahh yeah, the piece is called Tiffany for Breakfast. Basically, I generally like to use recognizable, familiar imagery in my work, and run it through the Eelus Filter™ to turn it into the unrecognisable, the unfamiliar. You ever seen the film ‘They Live’? Of course you have. Well my thought process, my brain, is kinda like the special sunglasses in that film. I see an image, then look at it again through the filtered specs and what’s produced is what I see. So for ‘Tiffany for Breakfast’, I wanted to take the original image, loved by thousands as it sits on the front of greetings cards and naff Ikea artwork, and put my dark stamp on it for the enjoyment of the more sinister of us out there.

Who do you rate in the “scene” today and why?

I tend to rate and respect anybody who works a LOT and constantly produces what seems to be an effortlessly high standard of work. So in that category for me, (excuse me while I take a deep breath), Eine, Banksy, Mr Jago, Will Barras, Dave Kinsey, WK Interact, Blu, Shephard Fairey, Os Gemeos, Word to Mother, Dave the Chimp, Dan Witz. There’s more but I’m a busy man 😉

From there, the main project for me at the minute is my first show on October the 2nd at the Electrik Sheep Gallery in Newcastle. Mixed in with that and from Oct onward I’d like to concentrate on getting back to what put me on this path in the first place, street work. I’m finally getting relaxed and happy with what I’m producing and have some really nice ideas for outside pieces so that’s where I want to be going from here.

As long as I’m creating something and working for myself every day I’m happy. Can’t really ask for more.