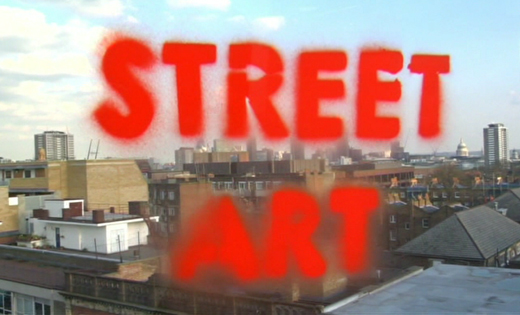 To coincide with the recent exhibition, talks and screenings at the Tate Modern, they’ve released a DVD to celebrate the scene we all know and love.

Street Art – Painting the City is a documentary about the scene and is more of an educational tool than a full blown documentary. The film covers Paris, London and Madrid where the focus is on current big names who like to flit about their respective cities making their mark(s). Seeing the diverse artwork on film will make you want to take a quick holiday break to the city of Paris or London the next time you do not work.

I was impressed with the quality of production, and namely the soundtrack, which featured some choice cuts from The Emperor Machine. The docu is a little short, but the story follows the artists in their respective cities and we can hear them talk about the varying approaches to street art across the globe.

You also get a chance to meet (on screen) some of the artists who took part in the first ever Street Art exhibition at the Tate Modern, and they explore the rapidly expanding commercial market, explaining how it’s turning street artists into big earners at the auction houses. Unfortunately this section is rather short, so I do hope they make a return or follow up DVD of sorts to explore this matter further.

Overall, they Tate has posed the question: “What does this growth mean for the formerly underground and anti-establishment scene.

Even though, as previously mentioned, it’s sort, it’s still an interesting watch, and certainly worth the £9.99 price tag. Go grab yourself a copy now