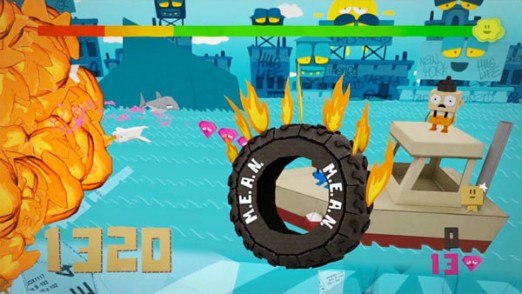 ‘Derrick the Deathfin‘ has succesfully launched onto the PlayStation Network. It’s not only the first proper Ronzo video game, but also the world’s first underwater paper craft game ever made.

The game is a collaboration between Ronzo and gaming genius Different Tuna, and is pretty much all handmade.

Ronzo and crew on the style and art in the game:

“The art style of Derrick is really something different. We took a very analogue approach that resulted in a hand made game entirely crafted from paper. Ronzo developed the visual concept, look & feel and created all characters and scenery. I tried to avoid using computers as much as possible. I draw, experimented and built tons of paper objects (with the help of my friends) We build a set, filmed and animated the models with fishing wire on sticks” 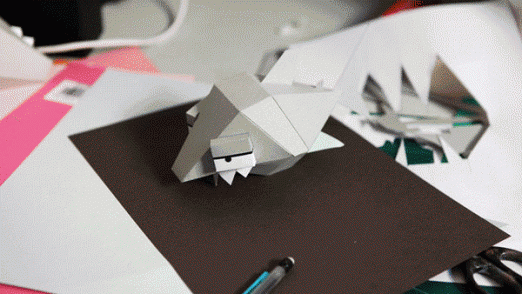 It’s a fast-paced arcade action title set in a unique aquatic world made entirely out of paper & card. After his parents are brutally turned into soup Derrick finds himself all alone in the deep blue sea… Luckily this gives him a flimsy pretext to destroy everything in his path in an orgy of rigid destruction! Derrick’s quest takes him all around a card board globe, through 3 types of level, 4 different continents, 11 vibrant environments and 32 challenging levels. On the way Derrick must race against the clock and his own metabolism, collect diamonds, jump through flaming tyres in the sky, puzzle his way past manmade obstructions, environmental disasters and duel to the death with oversized paper baddies.

You can sample his unique fast paced arcade action stylings, and profuse burping, on PSN right now for the deeply arousing price of $7.99 / €6.99.