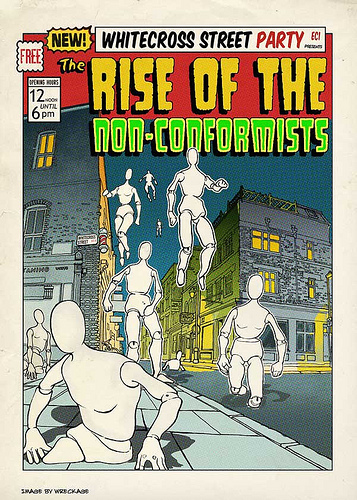 Fancy rubbing shoulders with leading artists this weekend? Then you need to hotfoot it down to the Whitecross Street Party which marks the opening of Rise of the Non-Conformists, a six week urban art exhibition in London’s East End, for two days of sun, fun and frivolity. 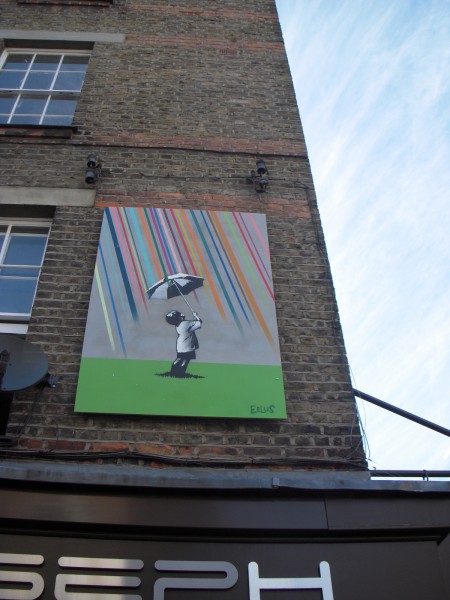 More than 30 leading artists (including Eelus, Paul Insect, Best Ever, Burning Candy, Mysterious Al, Shepard Fairey and Dr.D) are contributing time and artwork to the event, much of which you’ll be able to experience for yourself during various live paints. But it’s not all about the art, there’s also a plethora of things to get involved with; giant knitting, silk screen and stencil printing workshops, and photo booths are just a few of the activities on offer to those who prefer to be a little more hands on. You can also expect carnival style parades, live music and street vendors selling their wares and tasty treats from around the world.

Curator Teddy Baden, who will also be showcasing his work, has had this to say, “Whitecross Street Party Rise of the Non-Conformists is unorthodox, so expect something really different and special.” 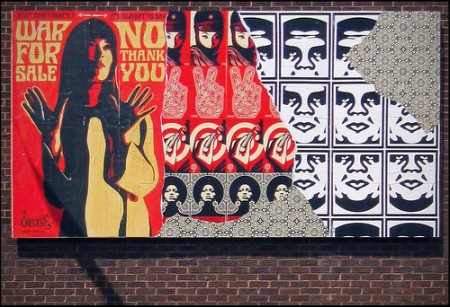 And the icing on the cake? At least 25% of all sales will be donated to SHP, a London charity that works with the homeless and those at risk of becoming homeless. So check down the back of your sofas for some extra pennies and treat yourself, safe in the knowledge that you’re donating to a worthy cause.

For further information, to buy artwork and enter a competition to win an exclusive Wreckage print, visit www.wxstreetparty.com