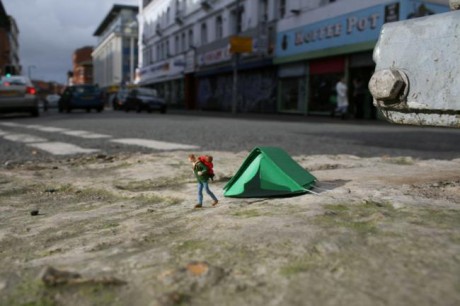 To celebrate the upcoming release of his new book “Global Model Village”, Slinkachu is launching #SlinkachGlobal, a worldwide social-media based competition that begins with a one-off workshop in association with the Rich Mix in London’s East End this Sunday, 23rd September.

The competition will challenge fans to create their own work’s inspired by the artist’s theme of ‘small people in a big world’, offering two people the chance to a signed copy of the new book and a print of his work.

Hosted by Slinkachu himself, this Sunday’s event will see the public try their hand at creating their own works with him and the East London craft and design collective, Craft Guerrilla. Attendees will then be encourages to take their works to the streets to take a photo in situ, uploading to Twitter with the hashtag of #SlinkachuGlobal. The workshop ends with a drinks reception, and Slink’s favourite piece will receive a signed copy of his new book. 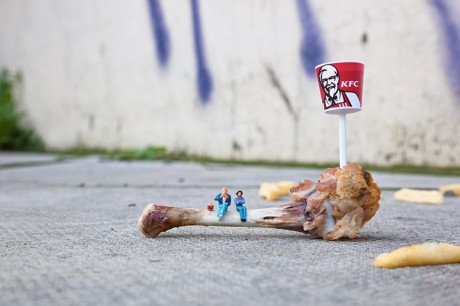 Following the event, fans worldwide will be given the chance to get involved by sending their own images over Twitter with the hashtag #SlinkachuGlobal or posting them to Slinkachu’s Facebook page for the chance to win a second signed, numbered copy of the book with enclosed print, plus other prizes.

The event on Sunday is open to the public, but will be on a first-come, first-served basis, so it’s probably a good idea to get down there early!

Published on September 29th the book release coincides with the Slinkachu’s third London solo exhibition, which runs at the Andipa Gallery in Knightsbridge from 27th September – 27th October before transferring to another gallery in New York.