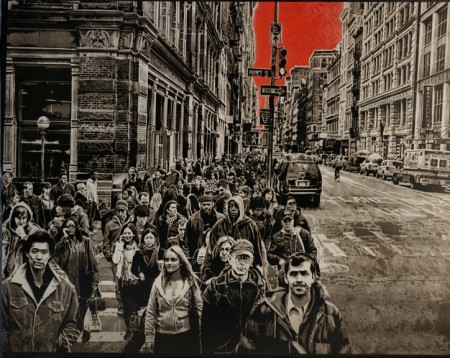 UK Street Art had the pleasure of catching up with the Don Corleone of stencil art, Logan Hicks, before his first solo UK show opens at Black Rat Press this Thursday (July 3). To hear all about his old studio next to Shepherd Fairey‘s, his desire to simply paint beautiful women and his thoughts on the raging Nike vs Adidas debate (we sort of made that last part up), check the full interview out after the jump. 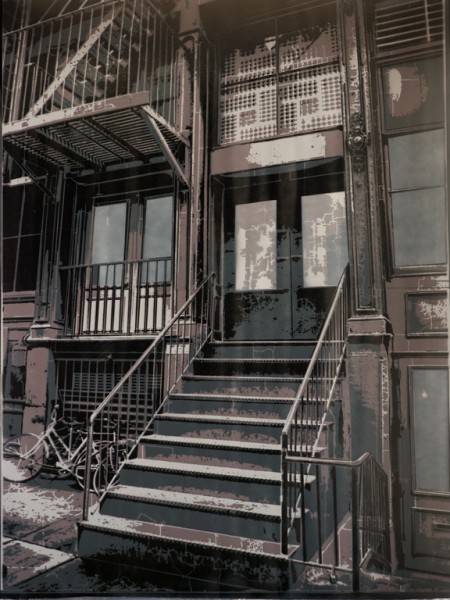 Welcome to London Logan, it’s great to have you here. If we start from the beginning, you grew up in Baltimore and were originally a screen-printer before becoming a stencil artist, can you tell us how you got into screen-printing? And why you ended up jacking it in and moving to California?

At the time I was sort of a big fish in a small pond in Baltimore. i just got tired of feeling like there was more to the world, but I wasn’t seeing it. So when I moved to Cali, I first moved to San Diego. A girlfriend was going to school there, so I figured that was a safe move to start with. At the time I was a little scared of closing a business that was doing well and moving 3000 miles to a place where I didn’t know anyone. I thought that San Diego would be easier than LA, but that would later prove incorrect. San Diego is beautiful, but it really wasn’t my scene. As odd as this may sound, it was too clean. It was like a Norman Rockwell picture. Back then Shepard Fairey was still living in SD and we ended up getting a place that was next to his studio. That was the only link to culture in SD though. I started taking trips up to Los Angeles and it was immediately clear that was where I needed to be. All the graffiti, wheat-pastes, and street art that I had read about in magazines for the past few years were now in front of me. It was no longer a magazine spread, it was the backdrop of my life. it was inspiring just seeing everybody doing their thing.

LA is so big that there was always something to look at when you drove cross town. I managed to lock into a good routine pretty quick which lead to meeting some creative people out there. But once I became acclimated to Los Angeles it was clear that it was not the town for stencil work. People seemed to respect the work I was doing, but graffiti dominated the landscape, not stencils, and the lowbrow art seemed to be in the galleries. So I always kind of felt like the odd man out. I have always been received better outside of the United States than in it. Although that seems to be changing lately. So even though I was living in the ground zero of urban/lowbrow/pop/street art, I was traveling out of the US more than I was showing in it. 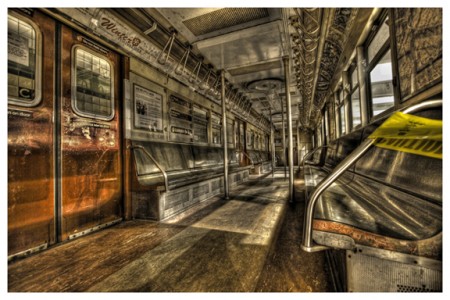 You’re known for an almost obsessively meticulous approach to your work, is that a reflection of your character or do you only apply such methodical logic to your work?

Yes, and no. I can be a slob in some respects. I guess I need something that I can focus on, so stencils provide that for me. As they say, everybody is good at something. For me it was stencils. Stencils felt natural. It came fluidly to me. I had been screen-printing for years, and stencils were a modified version of that. It just worked out for me. I tend to be very regimented in my thoughts, morals, ethics, approach, so I guess that the steadfastness of my character physically manifests itself in the stencils I do. But if you were to look at my surroundings (house, studio, car, etc) you would see that my surroundings do not benefit from my obsessive approach. I like to think that I am just like my art. Gritty and dirty. 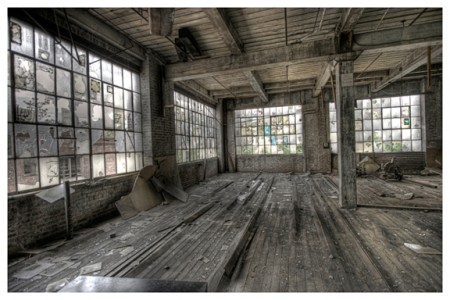 You’re also renowned for choosing particularly gritty images for the subjects of your work, is this a conscious decision or are you simply, naturally more inclined to urban spaces?

I am just drawn to the grittiness. I have always been drawn to the struggle that the city provides. I seem to focus on those situations where the city has the potential to become an obstacle. In my head I envision this situation where the city and man are in this perpetual battle to exist independent of each other. it is just what catches my eye. The system of order that the city demands. The framework of behavior that is necessary within the urban environment. I wish I could paint beautiful women all day and be happy with it, but for some reason I have been cursed with the uncanny ability to focus intensely on things like rust, staircases, subways, buildings and decay. Lucky me. Haha. 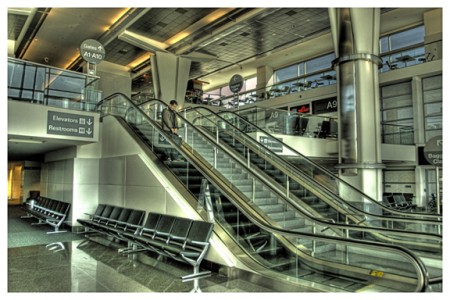 Recently i’ve seen that you’ve been experimenting with HDR photography, can you explain a little to the uninitiated out there what this entails and the effect you can produce?

HDR photography is a process whereby a shot is bracketed. One photo has a normal exposure, one photo is under exposed, and one photo is over exposed. This ensures that all the detail of a scene is captured. Then those three photographs (there can be more than three photos also) are then merged into one photograph. Basically the photos pick the areas with the same tonality and detail. There is an equal amount of detail in the shadows, and the highlights. This is what gives it the surreal feel, but it is photography nevertheless. It has this hyper-realism that I really like. It has that same abundance of detail that my stencil work has.

For years people had suggested that I display the photos that I use to make my stencil work. The suggestion never resonated with me until I found the HDR photography. I stumbled onto a few HDR photos online one day, and was on an immediate quest to perfect the HDR process. That was almost  a year ago, but I have put in double time trying to get it right. I began to find that some photos were best used for stencils, and others worked well simply as photos. Over the past year, the photos have continued to evolve, and I have become happy enough with the results to display them. This show at Black Rat marks the first time I have displayed them.

OK, so onto your show at BRP, how are you feeling about it all? It seems long overdue.

I am so excited I can barely contain myself. I feel very confident with the new work. For years I have felt like I mastered the art of doing a piece here and there, but I never really got to sink my teeth into doing an entire show. I have spent the better part of the last 6 months in the studio creating these works. Although strong sales would be the icing on the cake, I can sit back and relax now that I know I did all I could. 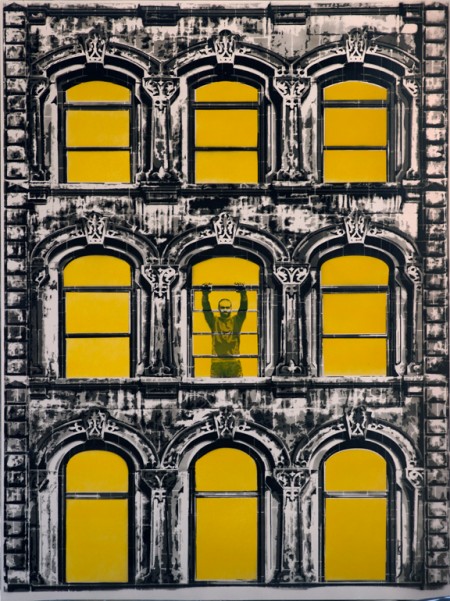 Have you got any plans apart from the show for your time over here? Can we expect some delights on our streets from your fair hand?

Unfortunately I am only over here for a short time, so I dont know if I will have the time to do much street work. Because of the complexity of my work i am somewhat limited in how quick i can put my work up. The whole ‘hit and run’ approach doesn’t work well for me.  I’d like to leave my mark a bit, but I will just have to see how it goes. I am bringing a few murals with me though in case anything presents itself while I am there. 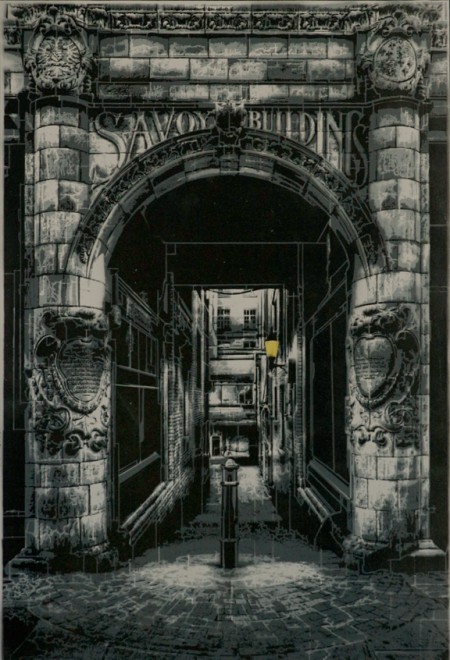 In the UK, I think it’s safe to say that we’ve got a very buoyant scene at the moment, what is your perception of the way things are shaping up this side of the pond? Is there anyone over here that you’re watching at the moment or can tip for the future?

London really is a different world right now in terms of the art scene. I think that many people, myself included, are waiting to see how things pan out. I would like to see a little of the hype die down and see if things stabilize. Regardless, there is an energy that is different here than any other place I have visited. I am just happy to be included in the whole thing.

As far as other people, there are a few people that I like. One that comes to mind is this obscure stencil guy named Banksy. He might be able to pull a living out of this stencil thing if he sticks with it. Same for this Nick Walker chap.

Cool we’ll, ahem, look out for those two, thanks for the tip.As well as the UK scene, the world’s urban art scene seems to be going from strength to strength, how do you feel about this and do you feel part of it? Are there people internationally that you particularly admire or on the flip-side think are unnecessarily overrated?

It is a bit hard to figure out where i am in for this whole thing. On one hand I feel like I am a part of the urban art scene because of the medium i use, but when i step back and look at my subject matter, and my process, I question how much I am really a part of it. I dont really know. I just figure I will just keep making the work and others can figure out which round hole this square peg fits into.

Do I think there there are people that are overrated? Hell yes. tons of them. But me naming names doesn’t do anything to further the scene I am a part of. I would rather focus on the positive people than try and ‘out’ the untalented ones. Just wait 5 years, and see who sticks around. Time is a harsher judge than I am. 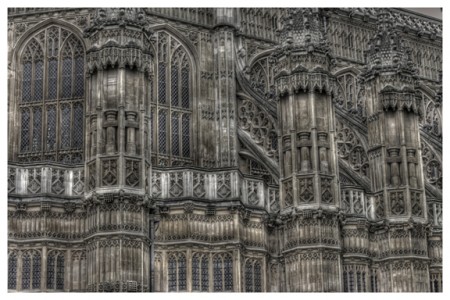 Silly question, you’ve designed shoes for K Swiss in the past, over at ukstreetart we’re divided between the swoosh and the stripes, if you had to choose one, which way would you go Nike or Adidas?

Depends on who is giving me a free pair (You reading this Nike/Adidas?) that was a hint. Send me some shit for free, pronto. Get with the program dudes. Send me shit!!!! Send it to Black Rat Press, to my attention. I am a size 12 (US))

Many thanks to Logan for this interview.