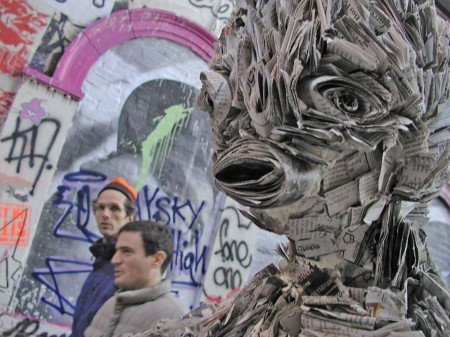 Helen Soteriou interviews the hugely successful urban sculptor Nick Georgiou about his background and the strange creatures he makes out of the stitched folds of thousands of discarded newspapers.

Can you tell me about yourself?

I was born in Queens, NY in 1980, the youngest of six children, six years after the Turkish Invasion of Cyprus. The occupation set in motion a series of events that would have a profound impact on my life. I spent my childhood surrounded by relatives who were prisoners of war. My father was born in Neo Xopio, Cyprus, which is currently occupied by Turkish troops, and on my mother’s side, she was born in Brooklyn but her family originated from Smyrna, later escaping the fires of 1922.

When did you start to create these newspaper sculptures and what was the inspiration behind them?

During the beginning of this decade – it all came together like a perfect storm. I saw my entire music and film collection shrink into my computer. I started getting my news online and began interacting with paper in a very different way.

I became obsessed with the immediacy of media and the 24 hour news cycle. There is no doubt about it, the Internet is killing print one book and one newspaper at a time. Books and newspapers are becoming artifacts of the 21st century. Every second more people are abandoning traditional methods of reading and heading straight to their computers or kindles. The truth is whatever we used to read off of paper, we’re now reading off digital screens. Our way of interacting with text is changing.

My work is not only about the decline of the printed word in today’s society but its rebirth as art.

As subjects, they appeal to me because they tell stories. I consider myself a storyteller and like to explore ideas from different perspectives. The regeneration of the printed word into another form—a book or newspaper into a sculpture–is a way of breathing new life into it. That’s what my art is essentially about: renewal.

Why did you place these creatures all over New York?

I love public art and in a city where everyone seems to be on autopilot, where everything is so planned and programmed…it’s an artists job to break through another reality. And these street pieces allowed me to do that. I suddenly found myself engaging my city and its people in a new language…then photographing these interactions and posting them online for the world to see.

What has been the public’s reaction?

I get a lot of double takes, some people stopping me even before I position the piece. Most people have mixed expressions, curiosity morphing into familiarity. At first, they aren’t sure what to make of it. Moving in for a closer look, most smile and say something like: “is this made from newspaper?” or “this is a book!”

There’s an element of discovery that unravels before their eyes as their minds struggle to make sense of what they’re observing. That’s one of the great things about street art, is witnessing the surprise.

Also, the public’s reaction online is just as significant. It’s amazing to be able to witness an image go viral and dissect what makes it universal/ what breaks down cultural/language barriers.

Where can we see your work?

I’ve been in Tucson, Arizona for half a year now and will be opening a new studio/gallery space in the early fall. Also I have some rare works for sale in London at the Andipa Gallery in Knightsbridge and the Black Rat Press in Shoreditch. And of course most of my work can be viewed and inquired about through my website myhumancomputer.com.