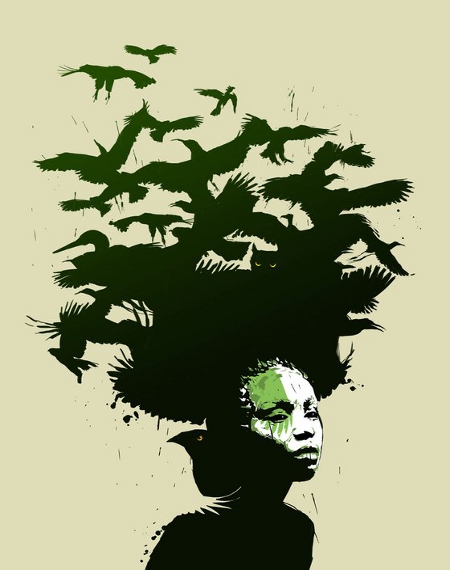 What do you get when you combine 1000 cans of paint, eight artists, two weeks and one village in The Gambia? Wide Open Walls, an art safari, and an experience like no other.

Eelus began working on this exciting new project having barely recovered from his impromptu solo show in New York; we grabbed him for a quick chat about his role as curator, the artists involved and his fear of spiders.

Tell us a little about the Wide Open Walls project
Wide Open Walls is basically a new and hopefully on-going, annual arts project thought up by Lawrence Williams, one of two founders of the Makasutu Culture Forest in The Gambia. Makasutu is around 1750 acres of forest now protected from deforestation, but is also part of a much larger project also set up by Lawrence and his Uncle, James English, which is the Ballabu Conservation Project. Ballabu is an 85 square kilometre area which incorporates 14 villages and 100,000 people and was set up by Lawrence and James to try and eliminate poverty through sustainable tourism.

With all this going on, as well as running the Mandina River lodges, 8 eco lodges designed and built by Lawrence and James within Makasutu, you’d think he’d be busy enough but he’s also a keen artist and very much into the street art scene. He’s part of a Gambian street art collective known as Bushdwellers who have already been painting stencils out there in and around the rural villages. One night after a few beers, the moment most great ideas come to mind, Lawrence contacted me and asked if I’d be up for flying out to stay with him for a couple of weeks to help paint one of the local villages in the hope of bringing more money into the area through increased tourism. From that point the idea grew, Lawrence gave me the daunting job role as project curator and since then I’ve managed to get seven other amazing artists on board to turn the village of Kubuneh into a giant open air arts project.

How did you choose the artists involved in the project?
I basically wanted to get a team together consisting not only of incredibly talented and driven artists whose style of work would fit this sort of environment, but who all have good reputations for being cool, easy going people. Two weeks is a long time to spend with people you don’t really know in such a strange and challenging environment, it was obvious there would be no time for egos or any other bullshit that some artists inherently drag around with them. So my artist A-Team consists of myself, Eine, Lucy McLauchlan, Broken Crow, Mysterious Al, Xenz, and Logan Hicks, who has also been very supportive and helped push the project forward since day one, including the organisation of the paint sponsorship from Sabotaz, so massive thanks to both of them. Each artist has a very different style and way of working so it’s going to be amazing to watch everything come together.