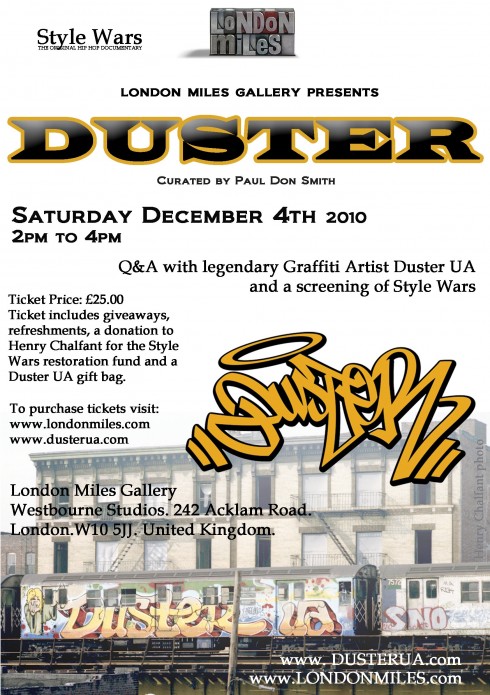 This is going to be an afternoon which will certainly be well spent- so UKSA only thought it would be right to let all our followers know about this one off and special event which London Miles Gallery is hosting next Saturday 4th December 2010. This event will be an afternoon with New York subway artist Duster (http://www.dusterua.com/). Curated by Paul ‘Don’ Smith, Duster will be travelling outside of the for the first time in his life, to give a talk about his legendary career as a New York subway graffiti artist during the 70’s and 80’s. The afternoon will include an exhibition of original and rare photographs from Henry Chalfant and Martha Cooper, authors of the graffiti and subway artists bible ‘SUBWAY ART’, an exhibition of limited edition prints and original artwork by Duster, and a one hour Q and A with the artist as he talks through his experiences as a Bronx, New York train writer.

Visitors to the event will enjoy a private screening of STYLE WARS; the original Hip Hop documentary directed by Tony Silver and co- produced with Henry Chalfant. The film was awarded the Grand Prize for Documentaries at the 1983 Sundance Film Festival. STYLE WARS is regarded as the indispensable documentation of New York street culture and subway art of the early ’80s, the filmic record of a golden age of youthful creativity that exploded into the world from a city in crisis. A percentage of all ticket sales for the event will go to the STYLE WARS restoration fund. For more information please visit www.stylewars.com.