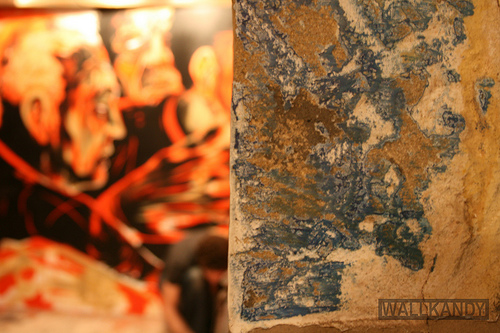 Dave Kinsey has been making cutting edge art for more than ten years. HOLY SH*T, his latest exhibition at Lazarides Gallery Newcastle, will feature a series of new paintings never before seen in the UK.

Kinsey’s paintings capture the spirit of the human condition through an energetic portrayal of urban figures with a style that is unmistakably his. Working with a range of media, he makes multi-layered, textured environments on the canvas.

Kinsey’s way of looking at the world is transformed into art that challenges the viewer’s consciousness. His portraits depict beings who are both triumphant and defiant, and transmit displays of raw emotion, as in Today is the Best Day of My Life (illustrated above right). In Untitled – Jesus (illustrated above left), a figure of Christ is held aloft by a man in agony, drips of paint falling from the unfinished edges. Kinsey says,

‘This work explores my personal experience with Christianity. My father was a minister, and I was raised, in part, surrounded by a religiously staged “perfect world” which caused me to associate religion with a certain amount of guilt. As I grew older I started to question its authenticity.

Being so close to religion led me to witness hypocrisies that seriously clashed with the teachings, and in the end, I had to admit to myself that there was an element of fear and bullshit to the whole thing that just couldn’t be denied.’

With this new series on canvas and panel, Kinsey is exploring the visual culture of religious iconography.

Kinsey was born in Pittsburgh in 1971 and attended the Art Institutes of Pittsburgh and Atlanta before moving to California in 1994. In 2001 he founded BLK/MRKT Gallery, allowing him to provide a platform for a new movement of young emerging talents. His art has been shown in galleries and museums worldwide.