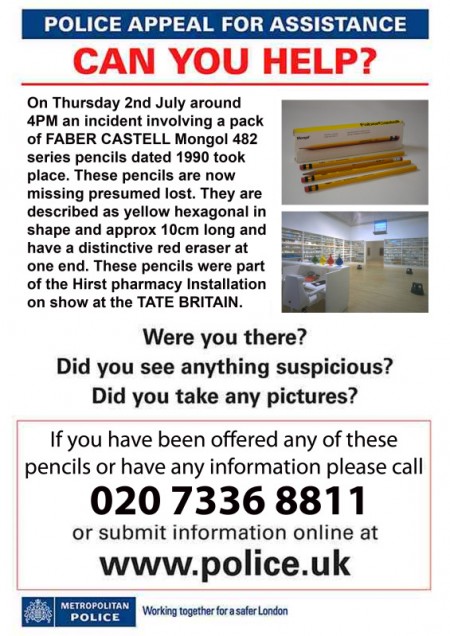 Cartrain is an artist whose work can be found mostly in backstreets of Brick Lane and Old Street. Cartrain’s left wing stencils and collages often contain recognisable figures such as George Bush and the Queen.

16 year old graffiti artist Cartrain walked in to the Tate Briton (London) early last week and removed a packet of pencils from one of Damien Hirsts exhibits. Damien Hirst and Cartrain have a long standing rocky history. Earlier this year Hirst targeted the young graffiti artist Cartrain using Design and Artists Copyright Society (DAC’s) for breach of copyright infringement on his latest series of artworks being sold vir 100artworks.com.

This is the latest in a string of events surrounding the feud between the two artists.

It began when Damien Hirst contracted the Design and Artists Copyright Society (DAC’s) to send a string of legal letters to Cartrain’s artdealer Tom Cuthbert at 100artworks.com in regards to Cartrain’s series of artworks ‘For the Love of God’. The online gallery surrendered the artworks to Damien Hirst with a verbal apology.

The legal grounds in which Hirst requested the artworks are very questionable and the story spread across the internet like wild fire. It was reported by The Independent, The Times, The Telegraph, The Guardian, The Daily Mail, Pop Bitch, Popbitch and many online blogs.

The urban art community are currently heavily debating the actions of Cartrain and what his next steps will be. Is this a random act of vandalism or a calculated guerilla art stunt? Only time will tell.

Stay tuned a new Cartrain print run will be launched over the next few days..