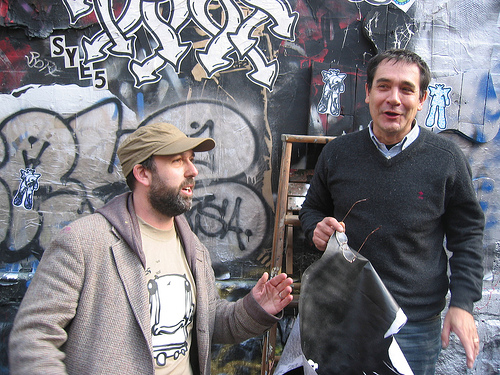 To coincide with the Tate Modern talk this Friday we have an interview with one of the pioneers of the stencil scene, Blek Le Rat. It’s an honour to have such a great name involved with the site, and as you read through his answers it’s evident that Blek has a real passion for what he does. We hope you enjoy reading it as much as we did.

Firstly, we’d like to know, where did it all start for you, how did you get into the stencil art?

Everything started in summer 1971 during a trip to NYC. I was invited by my friend Larry Wolhandler who was student in “Ecole des Beaux arts” in Paris. I met him in the school, we became very closed friends and he suggested to me to come to visit him, for summer in his city.

It was the very first time that I have been in contact with graffiti art. I remember the signatures in the subway , and some pieces in Greenwich village. I remember asking Larry, “why are people are doing this?  What does it mean?” and actually, Larry did not know the meaning of this graffiti. I came back to France with a lot questions in my mind and it took me few years to realise that something really important had happened in NYC.

In 1981 when I sarted to make graffiti in the streets of Paris , I tried to make an American piece but I didn’t have the style and the result was deceiving. I remember seeing something during my youth, on a trip to Italy a portrait in profile of Mussolini with a helmet which was a vestige of the WW2. I remember asking my father how the people are making this painting on the wall. He could only explain to me that it was done with a stencil and brushes and paint.

And this is exactly how a movement of the art started, with the combination of different things and someone to gather all the information and convert these information in an act. Very simple..

Rats were one of the first things you sprayed, why was this?

Because rats are kind of like wild rebels, they scare people and they bring plague to the people; They are a pathogen element and they spread the plague everywhere, just like street art. 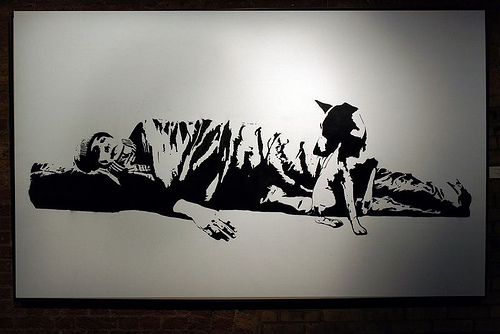 One of your first life sizes was of an Irish man shouting back at English soldiers in Belfast. Around this time, this would have been seen as a very controversial subject – was this your intention?

This man was taken from a photo in a newspaper illustrating an article about the war in Ireland. If I remember, I was more impressed by this old man shouting back than the soldiers laying down in the street who were aiming at people with their guns. I thought the image was really meaningful and not just about the war in Ireland but also about people who have the courage to take dangerous position in their life.

I remember seeing the same thing in Leipzig, Germany during a demonstration of Neo Nazis two years ago. They were like  two or three hundred of these Neo Nazis walking in the street with flags and everything, the atmosphere was really heav, and the people who were watching them on the sidewalk did not dare to say anything.

Everybody was watching them in silence and fear except one young guy on his bicycle who was doing a finger to the Nazis which insulted them. I have to say that I relayed the guy and after a while everybody show their finger to the Nazisand it was really funny !

I have always been representating people since my first drawing when I was student in art. I don’t know, I can’t imagine to represent anything else other than people with my art. It is mostly a social worry that I feel and certainly a commentary of my social environment.

Tell us about the event that the Wooster Collective put on in NYC in 2006. Was this a massive step forward for both you and the “urban” art scene?

Yes, it was. There had never been such a huge street art event before. The number of people who came to the show was really unbelievable and somewhere it shows that this art is appreciated by the people and that it had a real audience in NYC .

You were over in the UK recently for your solo show at the Black Rat Gallery. How did that go?

It went really well! The audience for this art in London is also very important compared to France… 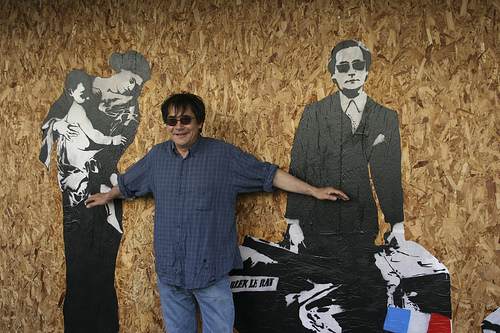 You also did some paste ups for the Conran Shop – we covered the photography for that. How did you get involved with Conran?

It was done for the launch of my book published by Thames and Hudson and it’s written by Sybille Prou, my wife and King ADZ. It was a great experience to meet different people at Conrad! I loved it.

Check out our coverage of the event here and here. There’s also a video of him at The Cans festival here

As the Conran paste ups were quite an interesting idea in terms of the client you were involved with, I was wondering if you feel the scene is becoming a bit mainstream – do you feel there are a lot of people “jumping on the bandwagon” so to speak?

I think this movement of art is the most important movement of all the time. There is no city in the world without graffiti or an urban expression done by artists. Nevertheless, it always takes a long time to get recognised for a new movement of art. It took more than a century for The Impressionists to be shown in museums…

About the artists who“jump on the bandwagon” this is normal and it is also a benefit because the more we are stronger we are.

Where do you see the scene going in the future?

It is very difficult to say, twenty five years ago I will never imagine than a such profusion of good artist such as you Mark, will make a different art and so interesting, in term of the evolution of history of art. I think we have to wait for the Chinese artists who are not really involved in the movement yet but I am sure in few years we will have good surprise coming from Asia… 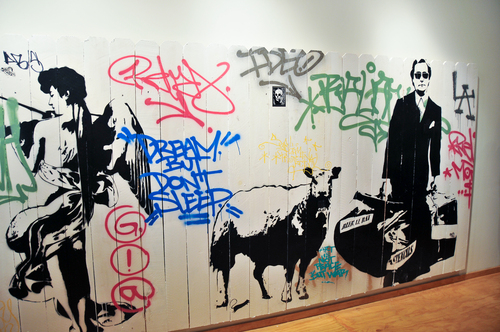 A lot of people call you the “pioneer” of stencil art – how does that feel to you, to be put on such a high pedestal?

I don’t feel like on a pedestal, I have a normal life with a family and with all problems as anybody .I don’t know, I don’t see many people, I don’t go out very often I am rather an “old solitary wolf” as we use to say in French.

What’s next for Blek?

I am preparing a show for the 18th of Oct at Jonathan Levine’s gallery in NYC ….and some new paste at the Chateau of Bagnac on the next week…

And finally, here’s a funny if a little interesting question for you…If you could ask Banksy one question, what would it be?

How do you make so huge stencil in the street without to be arrested by the police?