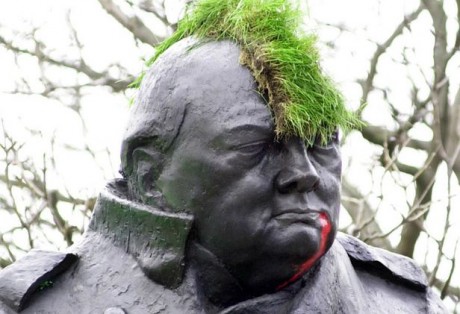 With the recent rioting in London, could the timing for a TV special from Banksy be any better or worse? Charting the history of public disorder, Channel 4 will be showing “The Antics Roadshow” this Saturday at 10.45pm.

The show is an hour-long special produced by Banksy charting the history of behaving badly in public, from anarchists and activists to attention seeking eccentrics. Contributors include Michael Fagan talking about breaking into the Queen’s bedroom: ‘I looked into her eyes, they were dark’; and Noel Godin, who pioneered attacking celebrities with custard pies: ‘Instead of a bullet I give them a cake’.

Banksy explains his reasoning behind the show: ‘Basically I just thought it was a good name for a TV programme and I’ve been working back from there’.

Narrated by Kathy Burke and produced by Jamie D’cruz, The Antics Roadshow examines the stories behind some of the most audacious stunts of recent times and what motivates the perpetrators, from mindless boredom to heartfelt political beliefs.

The show is also rumoured to include a world exclusive interview with the man responsible for putting the turf Mohican on Winston Churchill’s head.