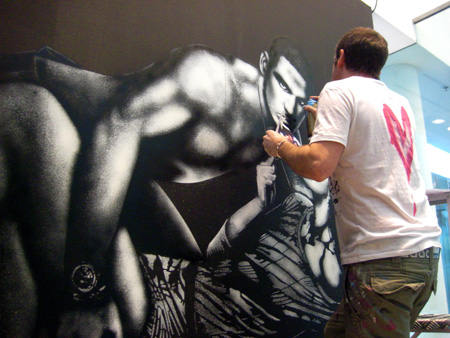 Rebecca Laing caught up with Fin DAC ahead of his print launch this Thursday at the Red Bull Studios in London:

The multi-layered, intricate and bold artwork of Fin DAC has been adorning walls globally for just over two years, so it’s hard to believe that this week see’s the release of his first print; Hendrix: Still Reigning, Still Dreaming, a beautiful image which pays respect to the legendary Jimi Hendrix as we approach the 40th anniversary of his death.

His iconic subject matter and the significance of the release date (the day of Hendrix’s death), paired with its vibrancy, and outstanding technical ability, have already made this print highly sought after. As such an exclusive event will be taking place on September 16th (to learn more and enter Zeitgeist’s competition to get yourself on the guestlist click here to celebrate the release of the limited edition screenprint, and the union between Fin and his new management, art aficionado’s Beautiful Crime.

Rebecca caught up with Fin DAC to discuss how he feels about entering a new phase in his life, who he admires, and the importance of positivity.

How long have you been an artist?
Just over 2 years

Have you always loved art?
100%, but my lack of classical training meant I had no confidence in my own work or talent. Any hopes and dreams I had of being an artist got lost a long time ago and I consigned myself to being just another wasted talent. Luckily fate dealt me what I needed to change that.

Can you remember when you first picked up a spray can, and what did you create?
I remember it distinctly. It was January 2008 and I had absolutely no idea what I was doing or how to go about it. I just remember that I had seen a lot of street art that I was convinced I could do better than, and I needed to prove it to myself. The piece was a diptych entitled ‘The Beginning and the End’ and it’s still hanging on my living room wall.