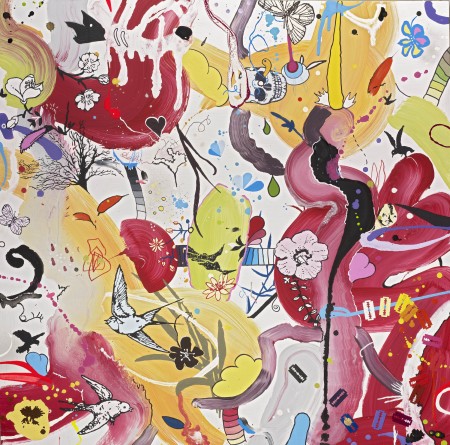 He’s been described as ‘one of the UK’s best young artists’ by Sir Alan Sugar, has exhibited alongside Banksy, Peter Blake and Damien Hirst, and is revered by artists, celebrities and the art savvy alike; he is Dan Baldwin, artiste du jour, and current resident of London’s Signal Gallery.

Multi-talented Baldwin’s new exhibition ‘A New Life’ is a celebration of recent and important changes in his life. Renewed and revived by a recent move to the country and buoyed by fatherhood, these new paintings are more colourful, playful and stripped back than his usual work, but the dark and disturbing undertones he has become known for still lurk beneath the surface.

The multi-dimensional effect in his work remains, with crucifixes, razorblades and foreign currency adorning the work. This extra element and his use of juxtapositions, life and death, happiness and melancholy, innocence and corruption, create aesthetically beautiful and provocative pieces which are highly coveted and admired.

Rebecca Laing spoke to Dan about his creative process, inspirations and the effect of the recession. You can read the full interview after the jump…

Tell us about your new show
A New Life is my newest collection of work. I hadn’t painted for 3 months after a really productive vase period, and found the first two pieces a real struggle; it was almost like I was coming to the end of working in a certain way so they were quite dark, but then something clicked on the third and fourth piece and I felt so free again. I’ve always been free in the sense that my style is organic and it can go in any direction, but I was enjoying colour, form and shape, and instead of having a large focal point or making a scene, I pulled it back and kept it really light and delicate. It’s harder to be subtle rather than heavy. My paintings have begun to metamorphasise as my life changes, and I love the new work.

What made you become an artist?
I was always a really creative child and initially thought about becoming a carpenter as I loved creating things. My mum suggested I should take evening classes in plumbing when I was 16 so I did a youth training scheme plumbing apprenticeship for 9 months, working on church roofs guttering and doing lead work and mending toilets, earning just £28 a week! When I turned 17 I thought ‘fuck this’ and went back to my old school where my art teacher sat me down to discuss my future and arranged an interview for me at Eastbourne College of Art and Technology (ECAT). Being accepted opened up a whole new world for me; I discovered Peter Blake and Hockney and spent all my time creating art. I knew art was my future, but i trained in illustration and communication media, and I’m glad I did, as it taught me how to be disciplined in the real world. I went full time in 2006, but it’s been quite a journey.

Do you think your work fits into any particular art bracket/genre?
I think people find it hard to place me. I’m not Urban but there are elements of politics in my work; I’m not Street but I can comfortably hang next to a D*Face. I painted a wall last week, but then in the last year I’ve exhibited at The Royal Academy twice, Basel, and at other established art fairs including London Art Fair, Scope, and Pulse, so my work crosses over into all areas. Maybe that’s why I’m like the Marmite of the art scene, hated or loved, people can’t place me.

Where do you draw your inspiration from?
I love colour and collecting things from flea markets, so I often get inspiration from seeing something like a bullet or war medal. I don’t plan my work, I start with colour. I saw the Bacon retrospective when the recession hit and my work went really dark with semi-circular bases and dark figures; that was a direct influence from Bacon I think, and Twombly too. 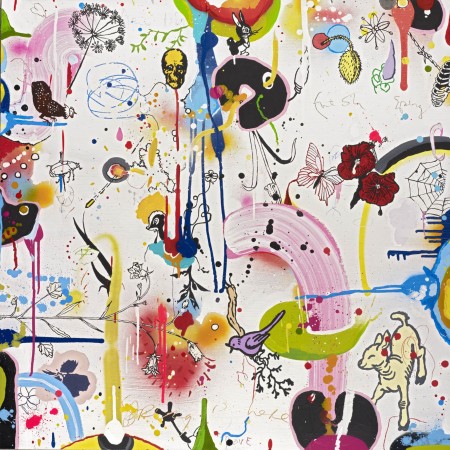 Who or what influences you?
Artists I admire are Bacon, Hirst, Blake, Hockney, Rauschenberg, Cornell, Twombly, Fiona Rae and Basquiat. I also respect Shepard Fairey and love his work. I collect art too and own work by Paul insect, Gilbert and George, Antony Micallef, and Jamie Reid. Moving to the country really affected my work, having a house with a garden and listening to the birds when i paint, watering the garden, that all came into the work in 2008. Now, being a father, I find my work is becoming more delicate.

Tell us about your creative process when you begin a new work
I start by painting a base colour then I’ll squirt another colour from a bottle over it, drag a third colour through while the canvas is still wet, and then freestyle spray and add dribbles. I’ll then spend a few hours layering and freestyling shapes until the base is really juicy. When dry I’ll then bring in the first element, which may be from a vintage book of children’s illustrations, so I’ll copy something like a little rabbit by hand, and then counterbalance with a silhouetted plant or leaf, or add a rose, a child, a lamb a bug or something like that; then the story begins. In the past I’ve screen-printed images like skulls or tanks onto the canvas, and layered things like dollars or medals. I pick at the colour with small details, and might bring in some gold or silver leaf. It’s part abstract, but becomes a story or puzzle which is built up in layers until it’s right.

You also create a lot of work away from the canvas, but what is your preferred medium to work with?
Painting on canvas is the best but creating vases is fun. I don’t do sculpture much now, and it was more like playing with stuffed birds and making weird shit with taxidermy.

Where is your favourite place to exhibit and what would be your ideal exhibition venue?

I’ve been lucky enough to show at The Royal Academy twice, and I had a nice show in the newly refurbished Storey Gallery in Lancaster last year. I’m excited by showing in Tokyo, Sydney, Denver and Paris in the next 12 months, but I’d still like a solo show in NYC, that’s always been a real ambition.

How did you feel when Apocalypse Wow, The End Of Everything, sold for £25,000 at Bonham’s auction in 2008?
It was a great piece and seemed to sum up the time; America and England as burned skulls. I was nervous, as I always am with auctions, but then elated (and a bit drunk as I’d had six bottles of Becks while waiting to see the results online). I still have no idea who owns it, but I heard it looked great on the night at Bonham’s.

Has the current economic climate affected your work?
Yes definitely, people aren’t buying originals like they were. You can’t rely on paintings as a sole income, but luckily I also do well with prints, vases, and lower end works. I’ve consciously made smaller work this year as a result of the recession, and kept my prices real and more affordable. My London gallery went down in 2008 which was hard, but it became a positive thing as i was then totally free to work with many people. I’ve been involved in 23 events from group shows so far this year; from print shows to charity events and fashion collaborations, so it’s really forced me to work even harder. It is still tough out there, and galleries are struggling to pay their artists.

How do you feel about those who buy artwork for investment rather than for the love of the piece?
It’s up to them what they do with it. I’m not precious, I’d rather the work gets sold and then I move on. I prefer to not know and let the gallery deal with that side of things. It gets a bit annoying if they’re being flipped on eBay, but it’s all part of the fun.

Do you find the reaction to your work differs between countries?
I’m not sure really. There was a very famous actor in LA looking at one of my paintings, and he liked it, but when he realised it was painted on Iraqi money and had a big American flag on it I think he became offended. I’m curious to see how they react in Tokyo, I hear they don’t like the colour green so I’m avoiding that. In Miami the population is very Jewish, so you can imagine the response my painting featuring Hitler and Jesus received at the Miami Art Fair! It didn’t sell.

What would you say has been the highlight of your career so far?
My proudest personal moment was getting on the property ladder, but with work I’m not sure as there’s been many great moments. I love doing charity events, at one i was stood next to John Hurt and at another Alexander McQueen! Meeting Peter Blake was cool, and I still get a buzz when a famous person emails me about a piece they bought. Chatting to Shepard Fairey at my show in Hollywood was amazing, and then being invited to his studio was cool. There’s so many…

What advice would you give to emerging artists?
Be prepared for a long tough road. It took me from 1990 to 1995 to graduate and then I wasn’t able to take the leap until 2006. Work hard, be unique, be thick skinned and keep the faith. It’s hard out there but you can get it if you want it. Get a business head on you too, promotion is a big part of it, but there’s so much help online these days.

Words by Rebecca Laing of www.zeitgeistmagazine.com